It seems that while Indian citizens may be licensed to own handguns or rifles /shotguns – their handguns are limited to smaller calibres below .32″.

The Indian Ordnance Factory IOF .32″ Ashani semi-auto pistol looks very much like a .38″ calibre Browning M1910 I read, but its’ internals have more in common with the Colt M1903.IOF .32″ 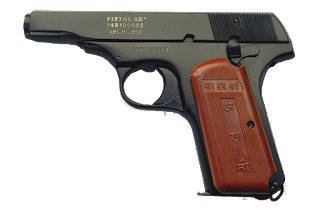 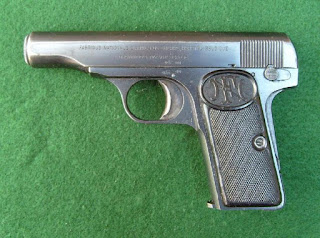 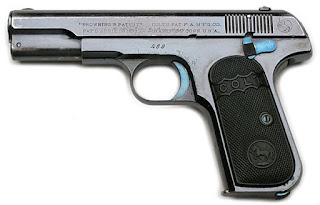 Whatever – I know nothing! However it seems that if you can jump through all the hoops to get an Indian Firearms License and a ‘No Objections Certificate’ (NOC) you may after a series of long waits** take delivery or collect in person an eight shot Ashani .32″ pistol – that is admitted by the manufacturer to have magazines of a weak and faulty design with unsupported feed lips! – And the magazine base is welded-on making service nearly impossible.

The ‘barrel lock’ design is also said to be faulty and currently understood to come from the factory Araldited in! – an improved replacement may be fitted by a gun smith. The plastic grips are also vulnerable to breaking.

The Indian on-line shooters state that as soon as you get your Ashani trot along to your nearest gun smith and have it modified so that it will work.

Now let’s be clear here – we are talking about a 100 year old design being re-worked in a marginally effective but popular cartridge for civilian sales.

But this .32″ ACP blow-back pistol is available bright plated or black powder coated. 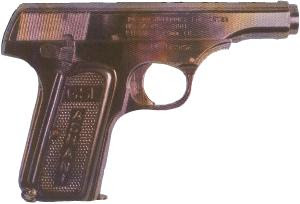 The .32″ ACP  cartridge is also referred to as the 7.65x17mm Browning and is rather low powered with light weight 60-70gn. bullets at a velocity around 1,000ft. per sec. – but may be loaded more powerfully than the .32″ S&W Long  ‘Nirbheek’ revolver cartridge – by using expanding bullets. 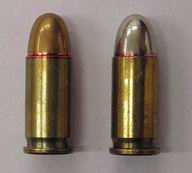 ** A standard British joke played on naïve young apprentices is to send them to the stores to get a “long weight” ( a long wait!).

Note: You may collect your Ashani Pistol in person from the Cossipore Factory gate between 8.30 a.m to 9.00 a.m only (- when available – by prior arrangement) – or from the Chandigarh Factory every third Wednesday of the month at 09.30 a.m.

– are these people serious?

It seems to me that the three handguns built for civilian sale in India are conceptually OK – but they do remind me of the old saying “any system is only as strong as its weakest link”.

Obvious shortcomings are the magazines, grips and barrel lock on the Ashani pistol – the alloy cylinder and chambers on the Nidar .22″ revolver – the price and the pathetic chambering of the Titanium alloy Nirbheek in .32″S&W Long – when it could easily adapt to the excellent and well mannered  .327″Federal Magnum and still meet the smaller calibre rules. (my post on .327″Federal Magnum here 24/01/2016).

The Ishapore plant is historically capable of excellent work and product – surely with attention to these important details they could produce a quality item that might even be worthy of export.